It was cloudy today while we had no rain during the tour irrespective of Typhoon No. 3 approaching the Kanto area, which was fortunate.

Our guest was a lady from Kuala Lumpur in Malaysia who is staying in a room of a private house in Hachioji City that is rented out by the owner to her under the system called Minpaku services.


She was just back from a 2 day 1 night Mount Fuji climbing tour.  She is very tough, isn’t she?


Fortunately, we didn’t see many visitors to Mount Takao today unlike on Saturdays and Sundays

Although we spent a lot of time in guiding her on the way taking advantage of much less crowded mountain trails, we arrived at the grounds of Yakuo-in Temple early enough to see a group of Buddhist priests march in procession on the way back to their living quarters after finishing the Goma Fire Rituals, which was around 11:30 am. The procession was led by a group of junior priests in the costume of mountain priest blowing trumpet shells which was a good subject for our guest’s smartphone camera.


Our guest is a Buddhist.  So, she is very familiar with the various Buddhist concepts we explained during the tour. 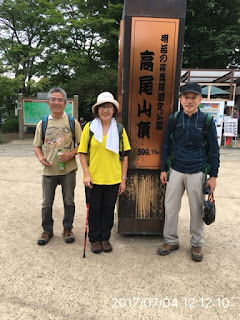 As you can imagine, we were not able to see Mount Fuji from the peak of the mountain which was unfortunate.  We were in the middle of the rainy season anyway.  We showed our guest some photos of Mount Fuji taken in fine weather at the peak of Mount Takao instead.  We took photos together with our guest there.


Today, we had no difficulty in finding vacant stone benches at the peak of the mountain where we had lunch.  We had a longer lunch time there talking about various topics including her family.


We left the peak of the mountain around 1:30 pm.  On the way back, we took a different route by following Iroha no Mori Trail, and then switching to Trail No. 4 going through a suspension bridge called "Miyama-bashi Bridge", which was the highlight on that route where we took photos with our guest again, and then came back to Trail No. 1.


At the Kasumidai Observation Deck, we changed our route from Trail No. 1 into Jataki Waterfall Trail heading for Takao Komagino Garden which features picturesque Japanese gardens.


On the way to Jataki Waterfall, we saw a snake (a tiger keelback which is a little poisonous one) catching a frog (a Japanese toad).  As a matter of course, we observed strictly one of the rules at Mount Takao, which is “Don’t disturb wildlife or plant! What you can take here are just their pictures.” so that the snake could take time in having its meal.  Our guest also strictly observed the rule and just took a picture of the snake with a leg of the frog in its mouth.


Before we arrive at Takao Komagino Garden, we found that our guest had a pain in the toe due to blisters created during her descent from Mount Fuji.  We gave her an emergency adhesive plaster and a bandage we had in our emergency medical kit for the first aid treatment to mitigate her pain. 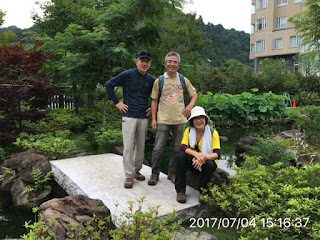 At Takao Kogagino Garden, we enjoyed a pond strolling garden.  We took a picture again with our guest there.  We enjoyed watching Japanese colored carp swimming in the pond, lotus flowers starting to be in bloom, a good collection of ‘bonsai’, a potted tree that has been dwarfed and shaped by such methods as pruning and wiring in order to create particularly aesthetic shapes.  We also tried ‘water harp cave’, which is a garden ornament and musical device creating a pleasant splashing sound.  We spent about one hour there.


Our guest kindly bought each of us a cup of coffee at the tearoom there while we were waiting for a bus for Takao Station.  At first, we planned to take a walk back to Takao Station but decided to change our plan considering the injured toe of our guest.


We had another enjoyable day!