On Nov.20th at 8:30am, we had 5 international students from Indonesia. Due to the bad weather forecast, It was not crowded even in the busy season. There's quite a few people at Takao-sanguchi station. 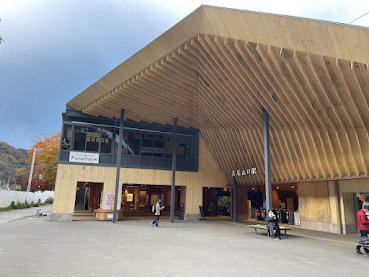 There’re many stalls along trail No.1. They enjoyed sesame dumpling “Dango”. 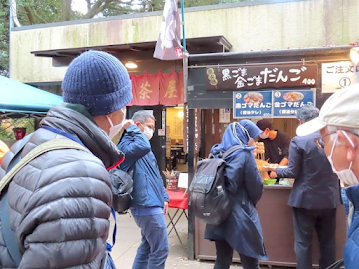 We explained the history of Yakuoin temple, the founder “Gyoki”, Buddhism, Shitoism, etc. We’re really happy that they got interested in the story. 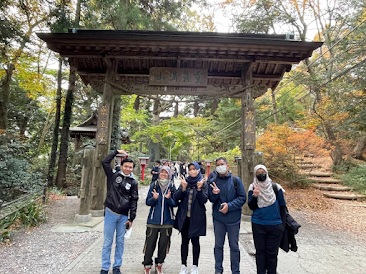 At the top of the mountain

We had lunch at the top of the mountain. We enjoyed chatting about Indonesian cuisine and Japanese cuisine, like “Nasi campur” in Indonesia and “Campur” in Okinawa,Japan. On the way back to the station

We went down No.4 trail. We enjoyed the rich nature in the area. 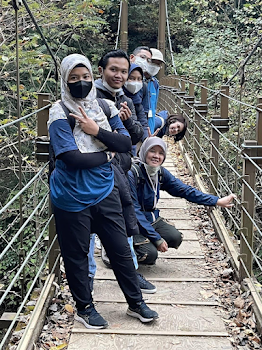 We arrived at the station at 2:00pm and said goodbye to the guests.

We had grateful messages from guests. It was a really great time.Thanks guests. Terima kasih (Arigato) 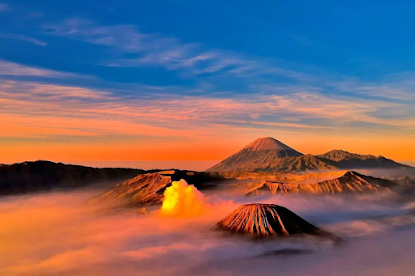 From our guests (Mt. Bromo in Indonesia).

We still enjoyed autumn foliage on the hike on Dec 3rd

On December 3rd at 10:15am we had 13 guests from JICA gathering at the exit of ticket gate of Takaosan-guchi of Keio line.  In this day, the winter cold has suddenly come and the temperature in the early morning has dropped to a few degrees Celsius around here though Mount Takao Momiji Festival had been holding until December 4 from October 29. Even so, the Takaosan-guchi station was overflowing with hikers. After introducing each of us, we split into two groups and headed for the summit. 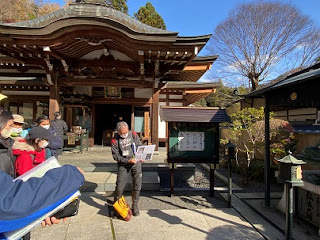 In front of the statue of Kobo-Daishi at Fudo-in, a branch temple of the main temple of Mountain Takao, our guide explained the relationship between the miniature 88 holy places of Mt. Takao and the pilgrimage of Shikoku Island of western Japan. The shingon sect of Buddhism was founded by Kobo-Daishi and the temple of Mt. Takao belongs to that. It is said that Kobo-Daishi was born in Shikoku and travelled around there to spread Buddhist teachings about 1200 years ago. To accomplish the Shikoku pilgrimage, it takes about two months over 1400kilometers on foot. But the miniature course on Mt. Takao only takes a day or two. In other words, you will receive some benefits with less effort. 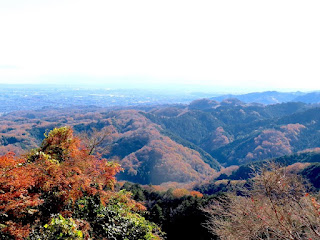 Although the sky was cloudy, the sun occasionally shone through. At the Kasumidai Observatory, we were able to see the Sky Tree clearly. It is 634 meters high, and the observatory is over 472meters high. From here we can enjoy a spectacular view of the Kanto plain including central Tokyo. 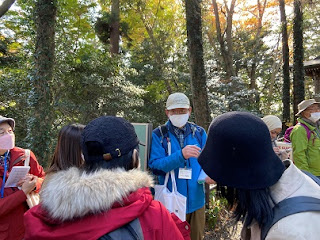 Along the trail no-1, the warm temperate forest zone from the south with an average temperature above 13 degrees Celsius faces the cool temperate forest zone from the north with an average temperature below 13 degrees Celsius. This mainly abounds Mt. Takao with some 1600 various species of plant. We walked this ridge trail of no 1, seeing more deciduous broad leaf trees on the northern slopes, contrary on the southern slopes there are more evergreen broad leaf trees. Red blossoms of camellia trees were seen here and there on the southern slopes. Another reason for the rich biodiversity comes from a much higher proportion of the natural forest of Mt. Takao compared with the surrounding area. 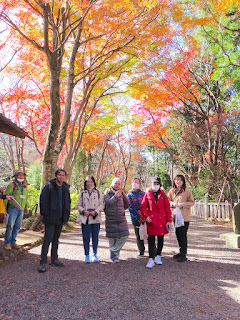 At Yuki-en, we were still able to enjoy autumn foliage. The leaves of the maple trees turned red and yellow, and it was very beautiful under the winter sunshine. 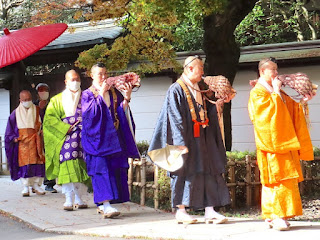 Around 12:30 we saw a group of Buddhist priests march in procession to the stairs to main hall to hold the Goma Fire ritual. Goma Fire ritual of Mt. Takao Yukiji-temple is held 6 times every day. It is said to have originated in India and refers to a Buddhist ritual of burning cedar sticks at the fire alter for divine blessings. The ritual lasts about 30 minutes. 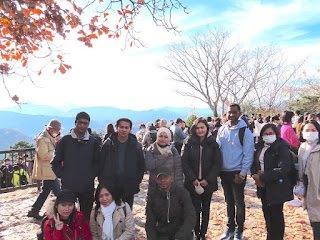 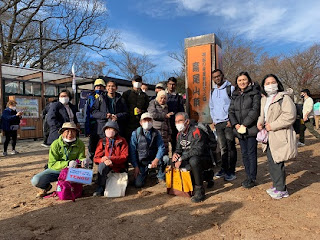 We arrived at summit around 13:00. From here, we could see Mt. fuji in thin clouds. Around the summit was crowded with many people, so we split into several small groups and had lunch. With the summit signpost in the background, everyone gathered and took a group photo. 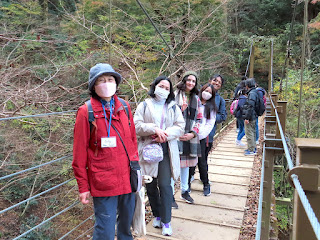 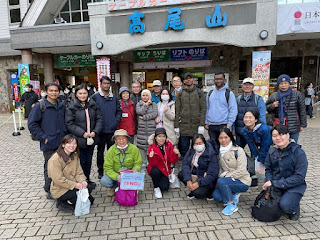 On the descent, we took trail no-4 then through Miyama-bashi, a suspension bridge, joined trail no-1. It was a pleasant walking through the woods down mountain trail. Then we got on the chairlift which took 12 minutes back to the foot of the mountain. Around 3pm we came back in front of Kiyotaki station. All of us returned safely and probably satisfied with the comfortable fatigue. We took a group photo again then ended the hiking tour by saying thank you for having a good time. 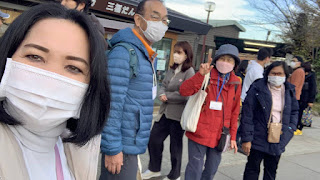 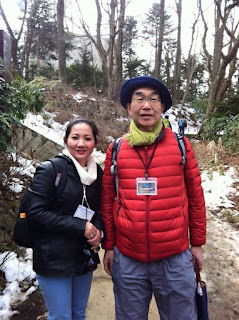 A surprising story found later; one of the guests had participated in the hiking tour in snow remaining February 6th 2016, six years ago and one of today’s guides also had guided the same guest as well as today.

You will wonder why they did not figure it out when they met this morning. I think six years is a very long time.(Comson)