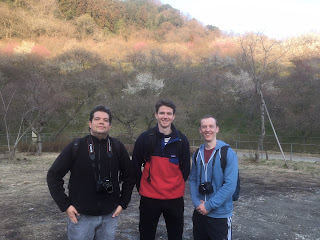 
They are temporary residents in Japan, working together for some project in a foreign company’s office in Tokyo.


They wanted to hike at Mt.Takao as well as to see the famous Fire Walking Festival which happened to be held in the afternoon on the day and we planned the itinerary accordingly.


We started the tour at 9:30am, taking the cable car up and then took No.1 trail to the Yakuoin main hall, covering various guide points on the way, including the view from Beer Mount, the Monkey Park, Octopus cedar tree, Otokozaka, Yukien Josinmon etc,.

A funny episode here was that;
When I asked the guests if they are married, to see if they were interested in Kurikara-Do, where a match making god is enshrined. One of the guests spread open his five fingers to show his marriage ring and I almost misunderstood that he had 5 wives and told them so. We all laughed. 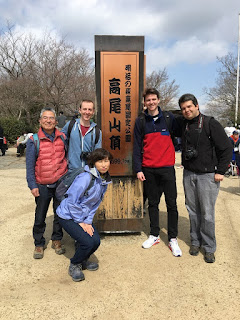 We arrived at the summit before noon and had early lunch there at the table under roof.


Oh, I should tell you that one of the guests was so tall that he hit his head rather hard against the lintel when he was walking towards the table. I am sorry for Mr. Gulliver.


Climbing down via trail No.4, crossing the suspension bridge and then back on the Trail No.1, we took the chairlift down to arrive at the site of the Fire Walking Festival around 1:00pm.


Before the fire was set to the Cypress branches prepared on the ground, we had to wait for some time but once the fire was set, we all were totally absorbed and excited by the spectacular scene unfolded before us.


It was nearly 3pm when fire walking was in its height. The tour could have ended here but because I knew Ume Matsuri (Japanese apricot Festival) was being held nearby, I asked the guests if they were interested in the Festival and ready to walk for an hour or so to visit popular Ume flower spots. They say “Yes“ in one big voice and we set out for the Festival. 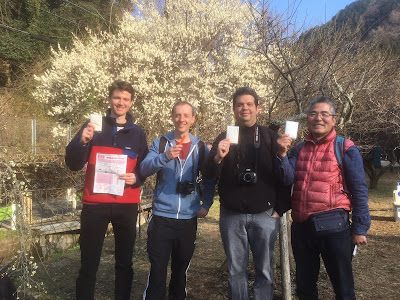 In the Festival, there was “Stamp Hike”, in which, participants were to visit 4 designated Ume flower spots to collect a stamp at each spot that verifies their visit. Once you collected 4 stamps, you are entitled to draw lots. As Stamp Hike was to close 4p.m., we had to hurry on our way.


We made it just in time to the last spot “Kogesawa Ume forest”, the best of the four spots, where at the time of full blossom, pink and white flowers of more than 1,400 Ume trees cover the whole hill, making it look like a fantasy land. Though our visit seemed to be 1week or so too early, we still enjoyed the flowers.


We draw lots there to get gorgeous prizes of 3 packs of pocket tissue paper and one LED pen light(without battery) among us 4. It was a great fun and we really enjoyed the Festival, Ume flowers and Stamp Hike.


As we were reasonably tired by then, we decided to take a bus to Takao station, where we shook hands and bid each other farewell around 5p.m. .

It’s a long day but we enjoyed every minute to the end.