Blog for May22 Tour

Not using cable car is a theme for today.


And, we took the trail No.6 bearing in mind that we might go farther up to another peak called Kobotoke-Shiroyama reachable by a walk of some one hour from Mt. Takao.


Our guest, Ms. Connie a lady from Philippines, has a plan to climb up Mt. Fuji during her next visit to our country (the forth of her career), and this was a training for that event, a sort of. 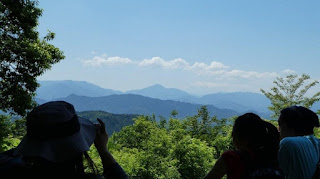 So, we tried to walk a bit faster, or tried not to stop so often for guiding, though we were often forced to stop because of a big group of pupils of primary school of no less than 200. 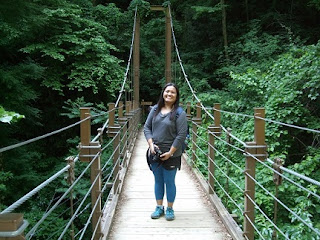 She has a very good character of out-going, and was very talkative and even seemed to have no moment of silence.


So, my colleague Nosan and I had a quite easy time all day long.


Though we couldn’t reach the summit of Kobotoke-Shiroyama, and compromised at a plateau called Momiji-dai, she could complete the walking up and down all the way.


I thought it was quite something for her only on the second day of her journey after a long flight. 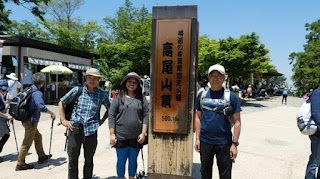 The tour on the 24th May

Today’s guests were about 30 people, visiting Japan from all over the world for some important conference in Tokyo, who had decided to visit Mt.Takao for a break between their busy conference schedule.

We, 4 guides for today’s tour, were waiting anxiously for the guests at Takaosanguchi railway station under ominous black clouds with occasional lightning and thunder.
They arrived at 2pm as scheduled and after introducing ourselves and giving them necessary advice for the tour, we started for the cable car station, when it began to rain.
Though they were well prepared for the rain, having vinyl rain coat, we were worried if we could give them an enjoyable tour.

The sky looked more and more ominous and when we arrived at the cable car station, we were told that the service had been suspended due to possible lightning and had to wait until the thunder cloud went away.

After 15minutes or so, the service resumed and we were in the cable car. When we arrived at the upper station, we found the black clouds had disappeared and the weather was rapidly improving. There, the guests were divided into 4 groups, each led by one of the 4 guides and the 4 groups started the tour separately.

A Chinese guest asked me if there was any guide who speaks Chinese but I was sorry that we are TENGU, Takaosan English Volunteer Guide Club!

Because the starting time was late today (usually it is 9:30am), we planned to make Yakuoin-Temple our destination, without usual walk up to the top of the mountain. Thanks to the weather, not so many visitors were around, making it possible for us to proceed with the tour on our own pace and rather effectively in a limited time.

By the time when we arrived at Yakuoin-Temple, the sky was blue and even the sun was shining and we all, guests and us guides, were enjoying the beautiful fresh green all around.

Though October and November are the most popular season for Mt.Takao, May is equally splendid time to visit the mountain. 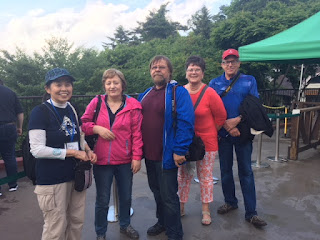 Having said this, I thought of beautiful scenery of the mountain in summer and winter time and I tell you that you will never be disappointed whatever time of the year you visit here. Come and see Mt.Takao not once but many times in different season!

We took the cable car down and arrived back at the lower station at 4:30 pm, 30minutes later than the scheduled time but it’s not bad, considering the circumstance.

We broke up there after taking group photo. Some of the guests were going to the public hot spa nearby. It must be the first experience for many of them and I am interested to know their impression. 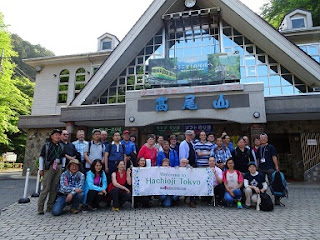 We thank you, all the guests to join our tour and hope it mentally and physically refreshed you, who were to work hard the next day.

The pleasant wind, the brilliant sunlight and the fresh green leaves made us all feel happy.On such a beautiful day, we had 3 guests, lovely young ladies from JICA. “May 5th” is the Children’s Day in Japan and is also a national holiday. There were already so many hikers on the foot when we started the tour. Despite congestion, we were able to get on the cable car with little waiting time. 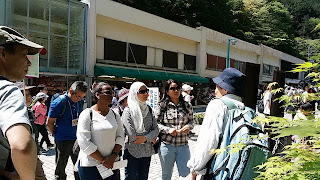 Then we took Trail No.1 and headed to the summit via Yakuo-in temple. In front of the Wild Grass Garden, one of the guides introduced a famous HAIKU (Japanese shortest style of poems) sang about violets by Basho Matsuo. Mt. Takao is famous as a mountain of violets. The guests seemed to be impressed by it.


We reached the top at 12:30 and fortunately we found vacant tables for lunch. After lunch, another guide gave a short lesson of ORIGAMI to the guests. She taught them how to fold “Japanese traditional helmet” which is a symbol for boys on Children’s Day. They were good at folding origami! 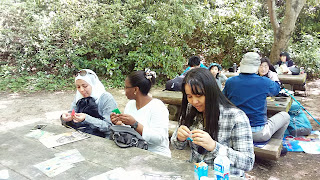 For our return, we took Fujimichi way and chair lifts. While waiting for our turn to ride the chair lifts, we enjoyed eating ice cream or dumplings and chatting with guests. There we also took a photo with them together. Thanks to our wonderful guests, we had a great time with them. 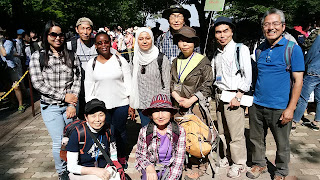 On 1st in May, we had guests from Australia. We got on the cable car and enjoyed its steepest part as always. 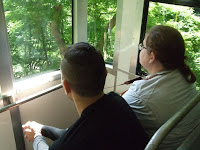 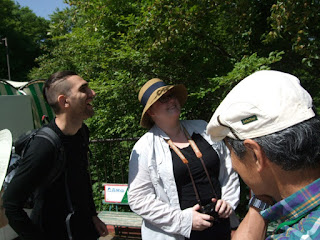 Japanese beech tree close to the upper cable car station was bearing a lot of fruits or nuts.
We walked under sunshine filtering through various kinds of  leaves. 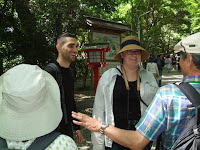 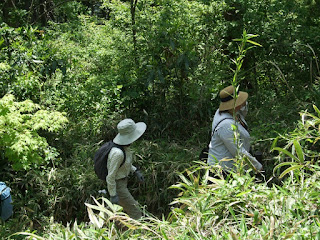 She said that she visited Kongobuji temple on Mt. Koya which is same of  religion of Yakuo-in temple on Mt. Takao.  And we were surprised that she knew “ Kachikachiyama” Japanese fairly tale of the funny raccooon dog. 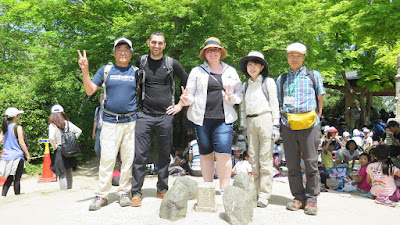