The tour start at 9:30 am.  In this tour, we will descend via Inariyama trail instead of a chair  lift.  It will be a little bit challenging but it will be fun to watch the autumn leaves in Mt. Takao.

Check our flyers for further information and make your reservation via entry form or an e-mail (tengu.guide at gmail.com) us with your name, number of persons joining the tour, and your contact information (eg your e-mail address and cell phone number).

We are looking forward to seeing you!


It’s a beautiful day that day but unfortunately, we got no reservation of foreign tourists, so we had practice for guiding and studied about Mt.Takao. We practiced guiding phrases of several points with a little shy because there were many tourists there. 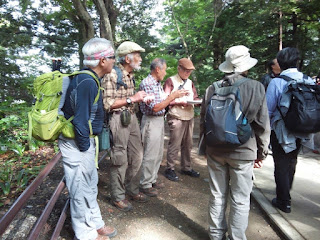 However, they were very valuable experiences for me. What is more, we exchanged new knowledge each other, such as flowers, trees, legend, history, literature, and international situation. 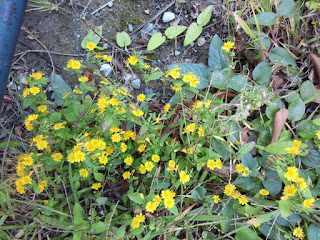 In addition, the place where we had lunch was a little-known spot and not crowded.
Miya, today’s leader performed picture-story after lunch as usual. 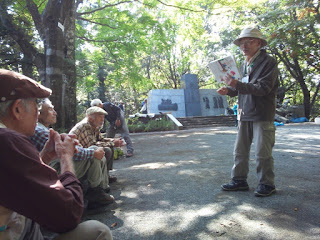 E-mail from a family, Texas USA

We had a wonderful hike with TENGU! The friendly group of volunteers made sure we had a great experience on Takao san, from start to finish. We were lucky enough to be in Tokyo during the monthly guided hike, which was a good break from the hustle and bustle of busy Tokyo. 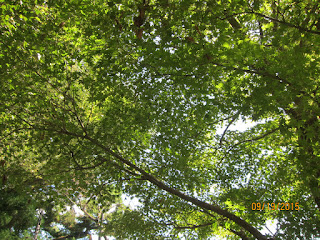 At the beginning of the hike, we were treated to historical facts and explanations of our surroundings. Hiking under a cascade of delicate green maple leaves was like a dream come true.  We played a game of scavenger hunt BINGO, which was a fun way to learn about some of the flora, fauna and sculptural features of Takao san. When we made it to the peak, we enjoyed our lunch in a shady spot, had story time and sang a song honoring Usagi(hare) in the autumn moon. 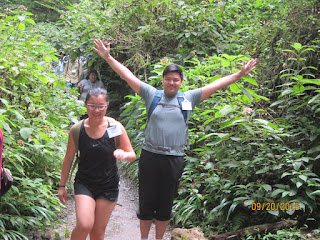 We chose route #6 on the way down, which followed a stream. Our family's hiking experience varies from expert to novice, but we were all able to make it down safely. And now, we have incomparable happy memories of Takao san; thanks to TENGU! Thank you so much for guiding us. We would not have had as much fun without you. You are the best!
To all our Takao san hiking friends "Konnichiwa". 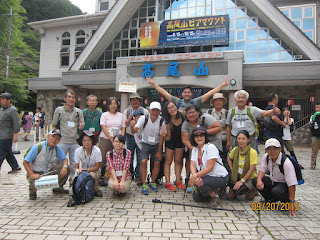 On Oct. 7th we held Mt. Takao tour inviting three Americans and five Japanese. Through the tour we communicated using English mainly, then Japanese language occasionally. All of them were first time to come to Mt. Takao and first time to visit Japan for three Americans. They came from Livemore city of California located near SanFrancisco. 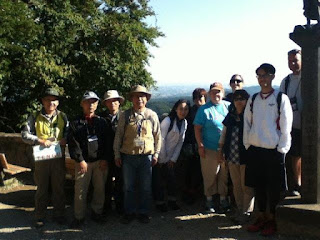 One of our member's had been in SanFrancisco before, so the conversations became animated.
The weather is fine, not so hot nor cold, suitable for hiking though Mt. Fuji was not seen from the summit because of cloudy sky. 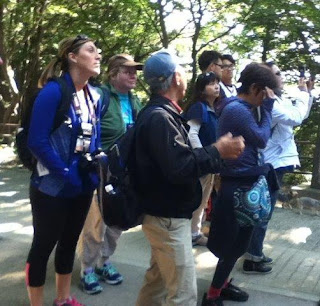 After tour we visited 599Museum which is located at the foot of mountain, one of Americans did not come back from the rest-room.
I was wondering something serious might happen to him. At last he came appeared and said. "I struggled desperately which button to push or pull which crank to flush water. Though Japanese high-Tech toilets were amazing." 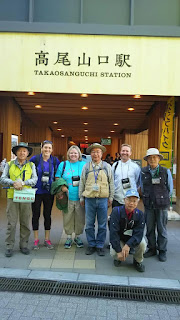 Highlights for the Tour of Oct 3rd: The Trumpet shell

Our group started the tour with Shirley's sweeping boy story.  A statue of apprentice priest is a symbol of Mt. Takao's important rule, "No littering". 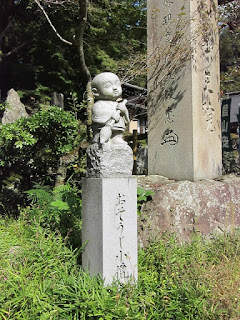 The highlights of our tour was the procession of priests.  We were blessed to have an opportunity to observe the recession of priests from the main hall after the Goma rituals of 11:00 AM.  It is a solemn procession with the sounds of a trumpet shells played by priests.  At the end of procession, one of our guests asked priests to take a picture with him.  Priests willingly complied with his request and surprisingly they even offered him to hold the trumpet shell. 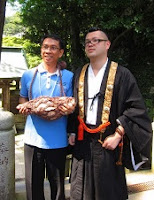 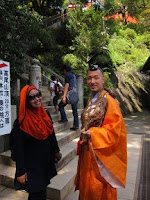 The trumpet shell is the one of 12 important tools for Shugendo that is widely practiced by Japanese priests and people including priests of Yakuoin Temple at Mt. Takao.  The sounds of the trumpet shell is often called as "獅子吼"(Shishiku) which means a lion's roar.  As a lion is the king of all beasts and its roar has a control over other livings, it is often compared to Buddha's preaching.  Many people know that priests and people practice Shugendo use a trumpet shell to communicate with others during their disciplining at the mountain as you can hear its sounds from distance.  In addition, to play a trumpet shell means a prayer as it is believed to have a power to call gods and protect from the evils. 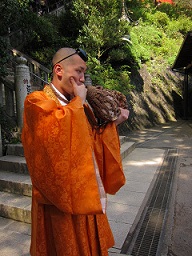 The priest gave us a blessing by playing a trumpet shell.  Our guests and TENGU's members enjoyed its sounds very much. It was a heartwarming moment for all of us.  We really appreciate priests at Yakuoin Temple for their kind hospitality and taking their time.

Thank you for our leader Sumo san for scheduling that allowed us to observe the procession.

A group left for up at 10:00 and B group at 10:07 by the cable car. The view from the observation deck was fairly good with a little cloudy sky near the sea coast .The trail No.1 was crowded with many hiking visitors today also.

The visitor from Pakistan mentioned in front of the Monkey Park that there are many kinds of animals in their country , not only the monkeys but tigers, other animals and lots of snakes The elephants are only in the zoo !
All of us walked up through 108 steps and went up to the new gate to the Stupa. Buddha’s whole life from the birth after the death was explained in front of the wall relief together with Izuna Deity Statue. But they were sad during the explanation of the Stone Monument of the East Japan Tsunami disaster, asking the toys on the monument belonging to the victims.
They were interested in the hexagonal stone wheel(Ishiguruma) and rotated it saying” Zange!, Zange!” (confession).
During the walk in the Temple and Shrine, the well prepared and polite explanations were surely impressed much to the visitors.
We reached to the top of the mountain at 12:05 and made a lot of photos for the memory there including the view of Mt. Fuji, partly appeared the shape over the cloud sky.

・ Lunch: 12:30-13:30 . 4 tables near the top as before. After the lunch the picture paper show was presented as usual and also impressed them.
・ Return: walked down through the trail No.4 (through the suspension bridge) until the Chair Lift Station..Not so crowded at the Chair Lift area.
・ Arrival at the Station at 14:30. No accident at all. Photos of all together.