All in all, an eventful day

When we first met our guest Ms. L. from Malaysia at the station, she spent no moment in nodding with a big smile to our sudden relaying enquiry originally raised by a gentleman, Mr. M. from Vietnam whether he could join our tour.

Another affirmative reply of Ms. L. followed soon to the enquiry by Mr. M. weather she might be a Buddhist.


He didn’t ask it without a reason.


Although he showed almost no interest in a fire ritual of the temple, he prayed in many places in the most serious and ardent manner I’ve never seen before.


Asking my colleague Kimie to guide at some regular points, we took a luncheon earlier than the norm before restarting to walk down on a natural trail called Inariyama around noon to arrive at the site of “Walking on Fire Festival” around 1:30 well in time for all of us to enjoy this showy ritual including sights of “firing” and “first monk walker”.

Flaring flame on the alter


This was not the end of the tour.
Saying thanks and good-bye to Mr. M. and Kimie at the station, Ms. L. and myself headed to the site of “Japanese Plum Festival”, one of the most successful events of the city, to enjoy its full bloom. 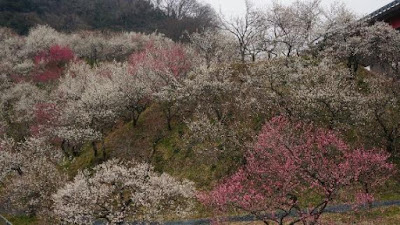 Although it was still cold in the morning, the weather was fine. Our guests were a "relatively" newly married couple from Brazil. They have been living in Tokyo for the last two years. Looks like they are still lovey-dovey.


On the way, we took a cable car leaving 10:00 am and then followed Trail No. 1 going through the precinct of Yakuo-in Temple that is the main religious structure in Mount Takao and then headed for the peak of Mount Takao.


We arrived at the main hall of Yakuo-in earlier than usual.  So, we could see a group of Buddhist priests march in procession to the main hall to hold the Goma Fire Ritual scheduled at 11:00 am.


Although the weather was reasonably good and we managed to see Tokyo Sky Tree, high-rise buildings in Shinjuku, etc. from "Kasumimae Observation Deck", we could not get the whole picture of Mount Fuji from the peak of the mountain due to some unwanted clouds, which was unfortunate.


We took lunch around the peak of the mountain.  On the way back, we took a different route on foot following firstly Trail No. 1 switching to Iroha no Mori Trail, and then followed Trail No. 4 going through a suspension bridge called "Miyama-bashi Bridge" which was exciting to our guests and then again back to Trail No. 1.


By the lunch time, it got warm enough to see some young guys wearing just T-shirts.  Spring is just around the corner.


Coming back to the foot of the mountain around 2:00 pm., we took a picture together with the guests, then said "Good-bye" to them. 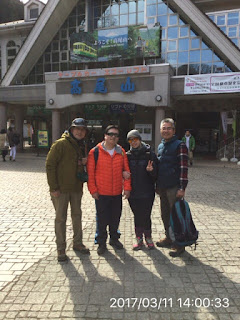