At 9:00 am. we met our guests just out of the ticket gate of the Takaosanguchi Station on the Keio Line.

Our guests were a middle-aged couple and their daughter from USA who had been staying in Japan since Saturday, 12 November.

On the way, after guiding our guests on the statue of Osoji-Kozo to remind them of our “Don’t leave any garbage behind” campaign and Japanese Giant Flying Squirrel that are native to Japan, we took a cable car leaving at 9:40 am from the Kiyotaki Station. 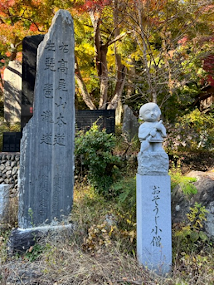 We, then, followed Trail 1 which is the front approach to Yakuo-in Temple.The weather was reasonably good while it was not good enough for a clearer view of Tokyo Skytree and high-rise buildings in the central Tokyo from Kasumi-mae Observation Deck. Although we saw a lot of foreign tourists, Trail No. 1 was not too much crowded unlike on weekends at this time of the year.

So, we could afford to spend more time in guiding our guests on the rich biodiversity of Mt. Takao, especially about the plant life, Mt. Takao as a sacred mountain of Shugendo as the fusion of Shinto, the indigenous religion of Japan and Buddhism, etc. stopping at some of the landmarks there, including Tako-sugi (Octopus Cedar Tree), Joshin-mon Gate (Gate of Purified Heart), Jinben-do Hall which is dedicated En-no-gyoja, the founder of Shugendo, etc. Even detouring to Yuki-en located at a little elevated place between Otoko-zaka and Onna-zaka where our guests enjoyed the photogenic white Thai style stupa taking some pictures there around 10:40 am, we were still able to arrive at the precinct of Yakuo-in Temple by 10:50 am. 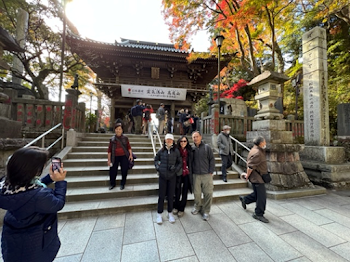 Our guests enjoyed some shopping in the grounds of Yakuo-in Temple and purchased some of the good luck charms.

Unfortunately, by spending a little too much time for shopping, when we arrived at the main hall of Yakuo-in Temple at 11:10 am, the 3rd performance of fire ritual by the monks called “Goma Fire Ritual” had already begun.

Consequently, we failed to witness the procession of Buddhist monks on the way to or from the main hall of Yakuo-in Temple.

I hope that our guests have well understood the difference between (i) the main hall of Yakuo-in which has the Buddhist temple like appearance except for being decorated with a “shimenawa”, a twisted rice straw rope with a cut and folded white paper symbolizing Shinto and (ii) Izuna Gongen-do Hall which has the Shinto shrine like appearance except for being equipped with an incense burner symbolizing Buddhism.

Although we arrived at the peak of Mt. Takao well before noon, unfortunately, the air was not clear and dry enough to see Mt. Fuji.

Instead, I showed a picture of Mt. Fuji viewed from the peak of Mt. Takao explaining (jokingly) that they should have been able to see it if they had behaved a little better. 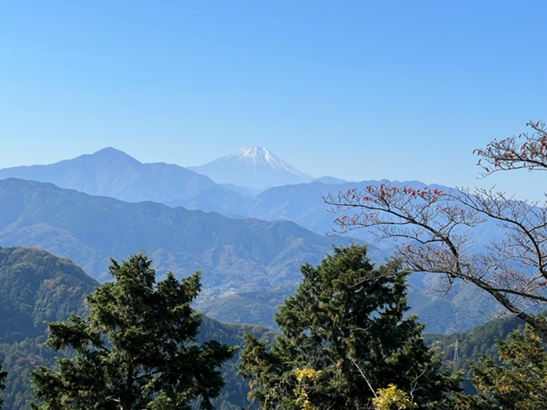 After having lunch there, we took photos together with our guest at 0:20 pm. 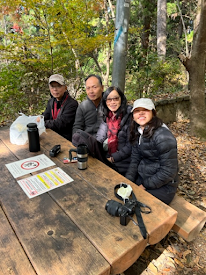 We left the peak of the mountain around 0:30 pm after taking the picture of our guests in front of the monument indicating that the mountain is at an altitude of 599 meters. 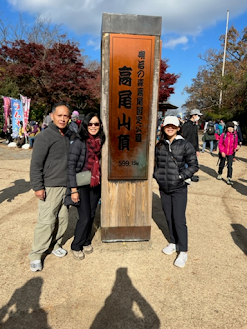 On the way back, we took a different route by following, firstly Trail 1, switching to “Iroha no Mori Trail”, then switching to Trail 4 going through a suspension bridge called "Miyama-bashi Bridge", which was one of the highlights on that route where we took photos of our guest again, and then came back to Trail 1. 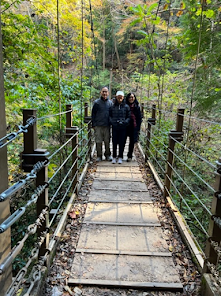 We continuously walked down Trail 1 via Konpiradaienchi (Konpiradai Observation Deck) which also commands a nice view of Tokyo. 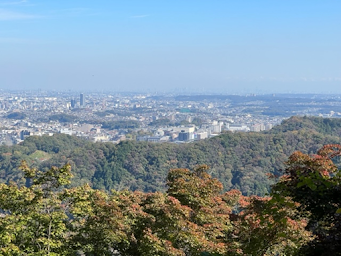 Eventually, we came back to the foot of the mountain at 2:15 pm and took photos with our guests again in front of the Kiyotaki Station (i.e. the cable car station). 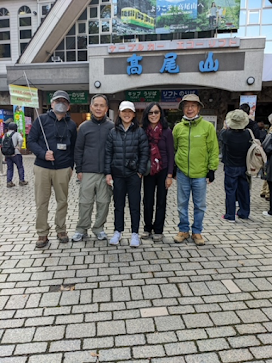 Then, we said “good-bye” to them, which was the end of the tour.

Some people may notice that my partner as a tour guide from the TENGU members switched from Nabe-san (who left the tour at the chair lift station on the way back) to Comson-san who took over the position of Nabe-san after playing another his role as a volunteer tour guide for Japanese visitors at Mt. Takao on the same day.

What a great teamwork, isn’t it?

Today’s guest was a youth from Australia, who is holidaying in Japan, traveling around from Tokyo to Kyushu. 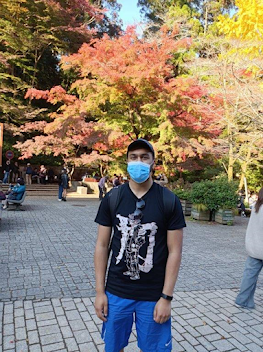 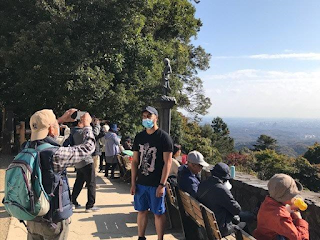 The weather was perfect with comfortable temperature. We started the tour at 10:15,

a rather late start compared with the usual tour. We had planned to take the cable car but as we didn’t want to waste time waiting for the cable car, we took chair lift to climb up instead. The reason for our hurrying along was that the guest wanted to experience the Shojin Ryori (Buddhist vegetarian cooking) to be served at the Yakuoin guest house from 11:00am, subject to prior sale. Though the number of visitors to Mt.Takao today was not as big as that of the peak time (which could be 1-2 weeks later), we wanted to make it sure that we will never miss the lunch. We arrived at the guest house in time. The lunch consists of rice, miso soup. (both free refills), salad, Udon soup(Japanese flour noodle), pickles, grated Japanese yam, sesame tofu and sweet red bean soup as a desert.

We enjoyed the lunch. It’s a fun and you may try it if you like. An advice for you here is that they accept cash only, no credit cards are acceptable. 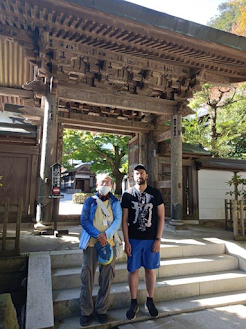 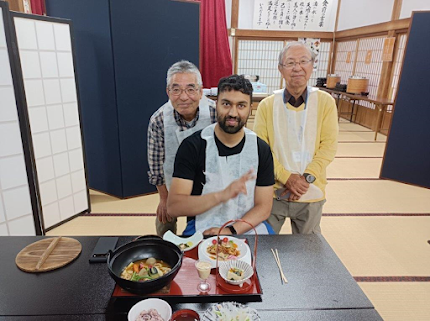 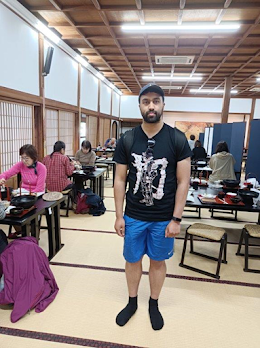 Then we started to the summit, where unfortunately we could not see Mt.Fuji due to the fog but could see at the visitor center there the giant flying squirrel (stuffed), a popular mascot of Mt.Takao. As we had no reason to hurry any more after lunch, we started descending leisurely via Trail no.4, where we crossed the popular suspension bridge, enjoying the autumnal tints all around. We safely arrived back at Kiyotaki Station by cable car, bathing in the afterglow of the beauty of Mt.Takao. 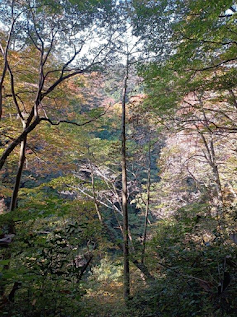 Though we were in a rush climbing up, we hope our guest enjoyed the tour including the lunch. The tour ended around 2pm. Autumn is most popular times to walk around at Mt. Takao. With pleasant temperatures and clear air enable us to enjoy seeing skyscrapers of central Tokyo and mountains in the distance including Mt. Fuji.

On November 5th Saturday, we held hiking tour participating 10 JICA members from several countries, 9 Tengu members and a membership applicant gathered at square of Takaosan-guchi station. A total of 20 people met up at 9:10am and had introductions everyone of them. After then we split into 2 groups and started Mt. Takao hiking tour under a little bit cloudy sky. Among more visitors than usual we had to be cautious not to be lost. We walked by the statue of young Buddhist monk with a broom “Osoji Kozo” explaining the Garbage Clean-up Activities of these 40 years. At the statue of Japanese giant flying squirrel as well. We took a cable car to Mount Takao Station located halfway up to the top. Then proceeded along trail no-1 guiding at observation deck, monkey park, wild plant garden, octopus cedar tree, the wildlife of this area, Joshinmon gate, jinben-do shrine, the stone monument of no killings, the strata of Mount Takao and 108 steps of men’s slope. 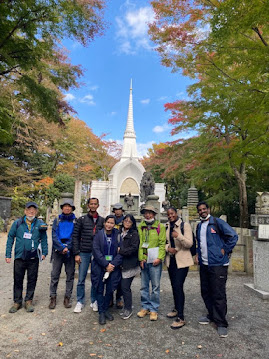 At the Yuki-en, literally, Joyful Garden, we did not meet many people. Leaves of trees were beginning to change to colored ones. The white structure on the above photo is a stupa where the remains of Buddha, founder of Buddhism, enshrined. The ashes of Buddha were given to Scout Association in 1931 by the King of Thailand in token of friendship between Thailand and Japan. On the approach to Yakuo-in Temple, at right-hand side are plaque plates, on each of those contributor’s name being written. Through Shitenno-mon gate, there are Six Sense Purification Stone Wheel, Tengu statues, Eight Dragon Kings Hall, Kurikara-do Hall, and Wish Coming True Ring. 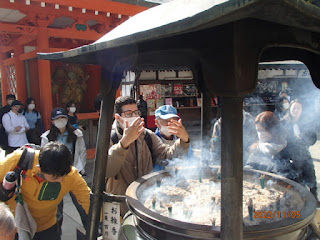 There is Nio-mon gate in front of main hall, Nio, literally, Two Heavenly Kings stand on either side to protect the Yakuo-in temple. The main hall was constructed in the early 20th century. Inside this hall, Healing Buddha, principal image, is enshrined. Here in main hall “Goma Fire Ritual” is held 6 times every day at 5:30 (Spring to Autumn) or 6:00 followed by 9:30,11:00,12:30、2:00 and 3:30. From the stairs to Izuna Gongen-do hall, we saw red Japanese maple leaves next to torii gate. Izuna Gongen-do Hall is made open to the visitors on 21st of every month and sacred Japanese sake wine offered. 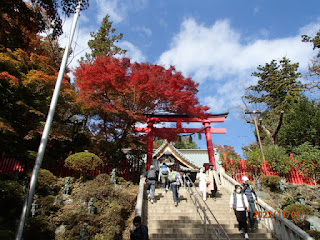 Fudo-do Hall, placed at top of long stairs, is considered to have been constructed in the late 17th century. The wooden standing statue of Fudo-myo-o is said to have been made in the 14th century. In the behind of this hall is the branch of Fuji Sengenn-sha Shrine which is related to the shrine of Mt. Fuji. One of participants, climbed Mt. Fuji this August by the trail of Fujinomiya (one of 4 trails to top of Mt. Fuji), explained it’s hard road to get to top of Mt. Fuji. 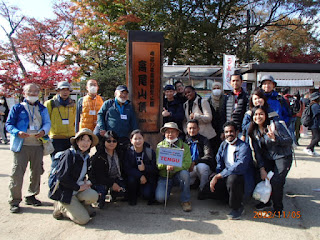 We arrived at top of Mt. Takao until 12:30. Unfortunately we could not see Mt. Fuji because of clouds. Many people obstructed us to eat lunch together. After lunch at 1:15 we departed to going down taking trail no-4. Many participants enjoyed fresh air and mountain trail including suspension bridge. 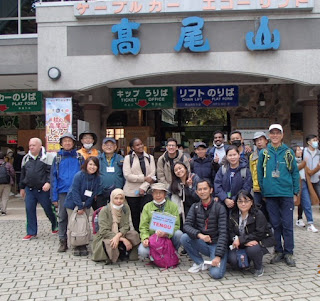 We took chairlift for down to the foot. It is also exciting experience riding 16minutes with panoramic view. Before 3pm we safely finished this tour. It is seemed for all to be a fun and great day.（Comson）
投稿者 TENGU Takao-san English Volunteer Guide Club 時刻: 19:54 0 件のコメント: