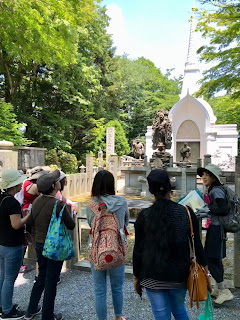 It was a sunny day and a little bit hot.
At around 9:30, there were totally 15 persons from JICA arrived Takaosanguchi station, We divided them into 3 groups. A group, B group and C group.Ad I was one of the tour guides for B group.There were 6 guests in B group and all were women.They are from different countries, which are Vietnam,Mongolia, Sri Lanka．( and Bhutan.)We set out at around 9:50 which was a little bit late than usual.On the way to the cable car station, the lady who comes from Mongolia bought a hat in a hat shop because it was quite hot and she didn’t have a hat.When we ride on the cable car, we gave a small guide to our guests that the cable car will bring us to the middle of mountain via the steepest slope of Japan.All of them were surprised and excited about it.After we got off the cable care, we arrived at the observatory area.Unfortunately, Tokyo sky tree tower wasn’t visible due to a lot of cloud.We continued our guides regarding regular spots from Octopus-cedar tree to Sengenjinjya Shrine. Since most of our guests are from Southeast Asia and they have religion of Buddhism, they showed big interests on our guides of temples. Because Mt.Takao contains both Buddhism and Japanese specific religion what is called Shinto in Japanese. When we got to the main hall of Yakuou-in temple, the lady who is from Mongolia brought a incense stick and burn it in the burner.It was our first time to see guest payed money for it. Though it just costs 100 yen, we thought that she is a rich people. We arrived at the summit at around 12:30. Unfortunately, Mt. Fuji wasn’t visible because of cloudy weather.Then we had a lunch at the top of Mt.Takao, after that we left at 13:00.We took the trail No.4 to get down the mountain.There is a bridge called Miyama bridge, which is a suspension bridge in trail No.4 Our guests were excited and took some photos when they walked cross the bridge.The most exciting moment for our guests was the chair lift, because it was first time for them to take the chair lift, and some of them were scared of it at the beginning, after we explained that it was a quite safe attraction, finally they told that they would like to try. When we reached to the KIYOTAKI station, all of them said that it was very exciting and they could see very fantastic view from chair lift. Lastly, they told that they were satisfied with the tour and we said goodbye to them at 2:30 PM.
END
WRITTEN BY LIN
投稿者 TENGU Takao-san English Volunteer Guide Club 時刻: 22:08 0 件のコメント:

On this time of early June, the rainy season has been supposed to set in at Tokyo. Mt.Takao, located within an hour of down town Tokyo, has also been so without an exception. It is said the rainy season sets in from next week. The weather of today was fair with occasional clouds fortunately and we had 17 guests from JICA, 2 enrollment applicants to our club and university student who hoped to interview a guide. We were divided into three groups, each group for 2 or 3guides, then left about 9:40AM. The fresh green leaves made us pleasant. 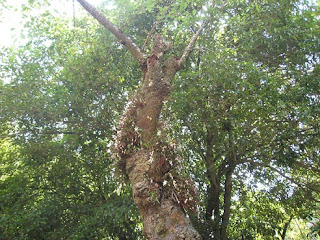 We got on a cable car for going half way up then took Trail no-1. At the Kasumi-dai observatory, we could see plural buildings in the direction of central Tokyo. Usually we can recognize the skyscrapers of Shinjyuku, but today spring haze disturbed it. On the way to the Yakuo-in temple, guiding some spots then we enjoyed talking about the concerns they had after arriving japan. 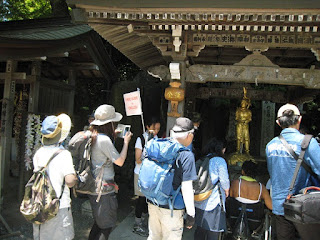 We reached to top around noon, where were very crowed and spring mist also prevented to look for Mt.Fuji. We took lunch there with smaller groups or acquaintances. During lunch time an accident happened but to turn out to be all right later. 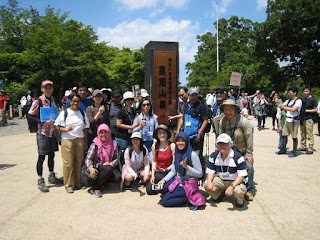 We took Fujimichi-way for going down which path was along many kinds of trees and fresh air was blowing in. It had been very comfortable. From Yakuoin-temple we joined Trail No-1 then taking chair-lift from the Sanjo-station riding 12 minutes to Sanroku-station. Around at 3PM, in front of Kiyotaki-Station which is for cable cars, we took photos together. Almost of the guests were first time to visit Mt.Takao and seemed to be having a lot of fun. That was our pleasure. 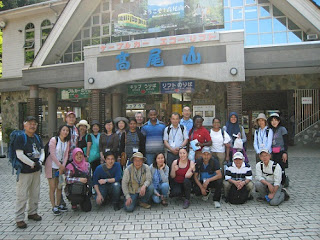 Wishing this opportunity helps them to know more about Japanese unaffected nature, history and people, we finished this hiking tour. (Comson)