Our tour was held on Sunday 20 October. We were worried about the damage of Mt. Takao caused from the huge and strong typhoon No.19 recently hit Eastern Japan: there were the widespread damage like mudslide, flood etc. We did information gathering carefully before our tour, so that trails we selected were almost ordinary and safe.

We had two young guests from Germany and they were staying in Tokyo as exchange students of a public university. We met at the Takaozanguchi station and caught a cable car and took the trail No.1 after we saw Shinjuku skyscrapers from view points. 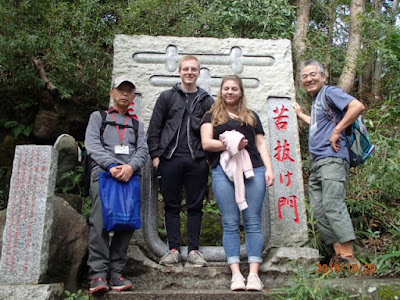 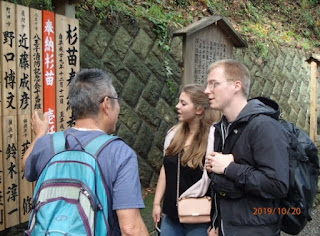 Our staff explained several historic and impressive points on the way and our guests paid attention and listened to the explanation eagerly.
In front of Eight Dragon King’s Hall where is popular because of its offbeat idea of washing money: it is said that the waters of the basin were able to multiply the money washed in it. 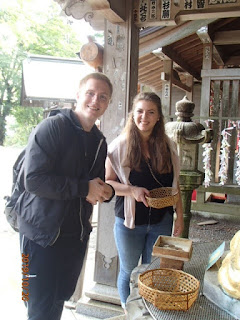 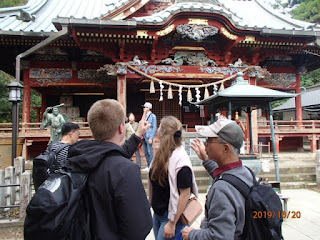 After lunch we walked down to the chair-lift station through the trail No. 4: there was the popular suspension bridge. 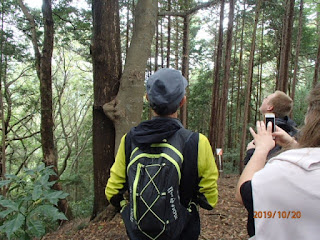 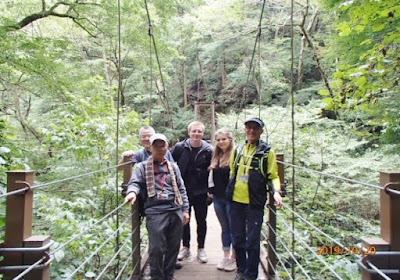 Both of our guests were strong walkers, so we went back to the cable car station at the foot of Mt.Takao in the early afternoon and declared the finish of the regular tour.
It was very enjoyable day!

The shining sun welcomed the 10 guests from six counties. They came to Japan through the programs of JICA, Japan International Cooperation Agency.

We all got together in front of the Takao-san Guchi Station and introduced ourselves in turn, and then started the tour.

We got on the cable car to go halfway up the mountain.  As soon as we got out of it, the sweet flavor came drifting in the air. There was no reason not to try “Tengu-yaki”, Tengu-shaped pancake with sweet bean paste inside, which is the bestseller in the mountain.

Walking along the Trail #1, we ran into a group of Japanese women wearing travel costumes of the Samurai Era. They were so friendly that they could hit it off with our international group right away!!

On the top of the mountain, we enjoyed an activity all together after lunch. One of our guides, Chiko, suddenly opened a piece of large paper in front of us and started to explain about Japanese word chain game and its song titled “ Kobuta(piggy), Tanuki(Raccoon dog), Kitsune(Fox), Neko(Cat)”, and then we started to sing the song all together. Surprisingly, people from six countries mastered the Japanese song quickly and started to sing it in chorus. For them, it was no problem even though its rhythm was getting faster and faster.

We started to go down the mountain, using the trail #4. Though it is tougher than the trail #1, people from JICA appeared to hike happily in the pristine nature.