It was another cold day.  During the tour the weather was not good enough for a clearer view of Tokyo Skytree and high rise buildings in the central Tokyo from the Observation Deck of Mount Takao Beer Mount. 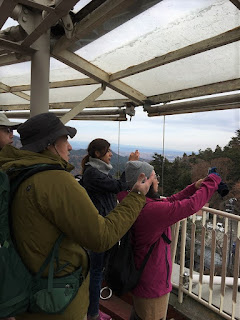 Our guests were two young ladies. One of them is from Sydney in Australia who has lived in the city of Yokohama for 4 years. The other is from Thailand and has a Japanese husband and two children living in the city of Hachioji for 1.5 years.


On the way, we took a cable car leaving at 10:00 am from Kiyotaki Station and then as usual followed Trail No. 1 which is the front approach to Yakuo-in Temple, the main religious structure of Mt. Takao. 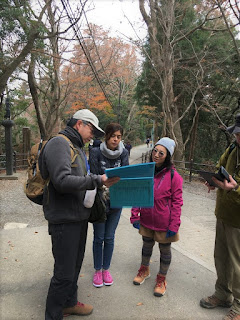 When we started the tour, we did not see too many visitors at the foot of the mountain.  Looks like the season of autumn leaves is now over. So, Trail No. 1 was not so crowded either.  We spent more time than usual in guiding our guests. 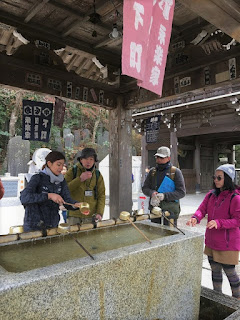 We were still, however, able to arrive at the main hall of Yakuo-in Temple around 11:30 am.  So, we thought that we should have been able to be  in time to witness the procession of Buddhist monks on the way back from their third performance of Buddhist fire ritual called “Goma Fire Ritual” of today which usually starts at 11:00 am and lasts about 30 minutes.  In fact, we failed to see their procession.  Looks like they terminated their ritual earlier than usual.  We were a little bit disappointed.


Before we got to the grounds of Yakuo-in Temple, it started drizzling while it stopped before the end of lunch time. 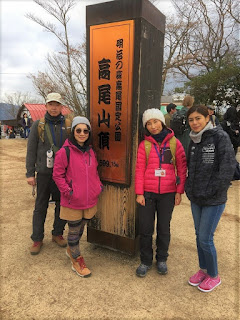 We left the peak of the mountain around 1:00 pm.  On the way back, we took a different route by following Iroha-no-mori Trail seeing a huge old beech tree nicknamed “Beauty” then switching to Trail No. 4 going through a suspension bridge called "Miyama-bashi Bridge", which was the highlight on that route where we took photos with our guests again, and then came back to Trail No. 1.


At the request of the guests, at Kasumi-dai Observation Deck, we changed the route from Trail No. 1 to Biwa-taki Trail to see the Biwa-taki Water Fall located at the southern foot of Mt. Takao where mountain priests take ascetic training of a standing under a water fall.  Fortunately, we happen to see one guy starting his training there. 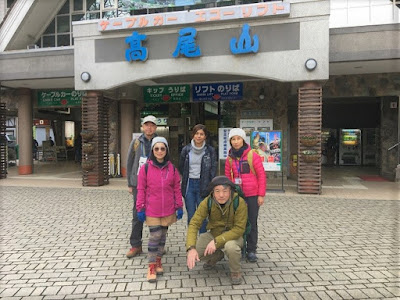 We came back to the foot of the mountain around 2:30 pm and took photos with our guests again in front of the cable car station, which was the end of the tour.

Today’s guests were a group of 30 people from all over the world, such as UK, Sweden, China, US, and so on. The schedule was tight, so that we started the tour as soon as they arrived. Fortunately, we were able to get on the cable car without waiting time. 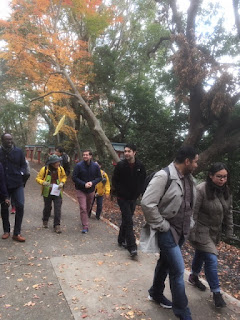 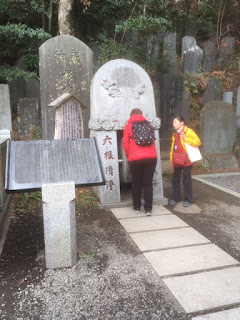 We were separated into 3 groups and headed toward the Yakuo-in temple which was today’s final goal. Though the high season of colorful autumn foliage was close to the end, we still enjoyed colored leaves here and there. And it was lucky that we encountered the line of priests who are going to perform Goma fire ritual in the main hall. 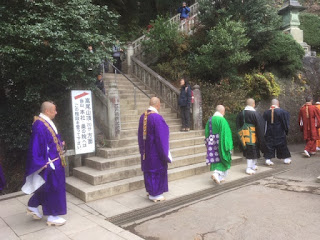 The guests listened to our talk carefully and were very helpful. Thanks to them, the tour was going smoothly until the end. They seemed to enjoy Takao Tour. If it’s true, it’s our great pleasure! Come again to Mt. Takao and next time please bring your partner, family or friends with you! 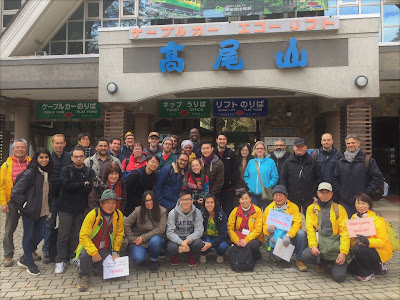 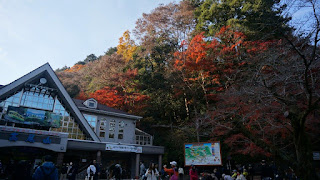 On Dec. 1st, beautiful autumn day, our guests were sisters from Singapore. They were travel lover and actually, they had already spent approx. 20days in Japan and they chose Mt. Takao for final destination of their trip. 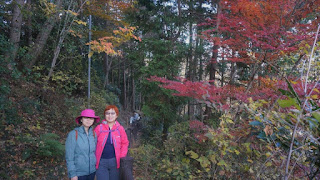 We met at Takao san-guchi station at 9:00 o’clock in the morning and we decided to go up without cable car or chair lift. ( They had plan to walk Nakasendo, Japanese historical trail from Tokyo to Nagoya and Kyoto next year and they thought this was good for one of the training for it )


On the trail to way up, we had wide range of conversations regarding not only Mt. Takao also for their travel in Japan, cultural and economic difference between Japan and Singapore etc. Actually, they traveled all over the world almost twice a year, that’s why they had wide range of interests and knowledge. So, we enjoyed conversations very much. 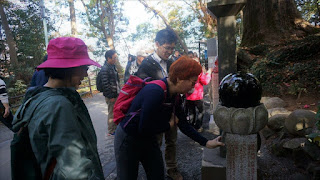 The day of trekking was little bit after the peak of autumn leaves but still good to see and take photo with beautiful red and yellow color of leaves, so lots of people were there and we had no place to have a lunch at the mountaintop. That’s why we went to Oku-Takao, a few minutes extra walk from the top to find the lunch place. Dec. 1st was the nice weather and we could see the Mt. Fuji from the top. Everyone took photo with beautiful shape of Mt. Fuji behind them. 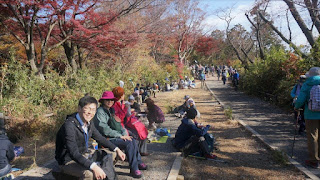 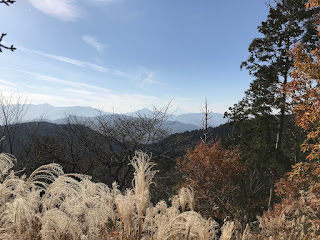 The way back was we walked Inariyama trail, the very natural trail. Our guide, Sumo-san knew well about the plants so we had lots of talking about plants with descending the trail.


We hope this trekking was the good memory of final destination of their Japan visit.

Today we had 9 guests from Bangladesh, Ecuador, El Salvador, Malaysia, Mongolia and Somalia.


Though the autumnal tint of leaves seems to be approaching to its end, the mountain still attracts many visitors and we had to wait for 15minutes or so to get on the cable car. But once on the cable car, we found that the 15minutes waiting was nothing, seeing the magnificent red and yellow under the sun all around.


We took the trail No.1 to the summit, visiting various points of interest on the way including Yukien garden and Yakuoin Temple, which were ablaze with autumn colors and therefore the most popular places here during autumn season. 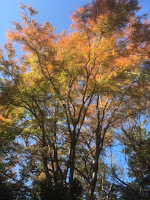 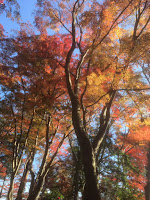 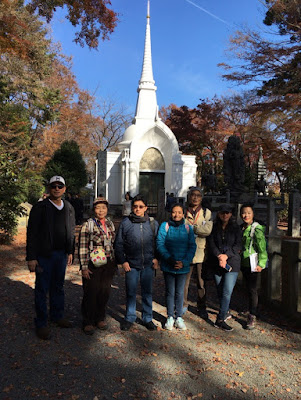 After enjoying at the summit the view of Mt.Fuji in a thin veil of clouds, we had lunch, surrounded by autumn colors. 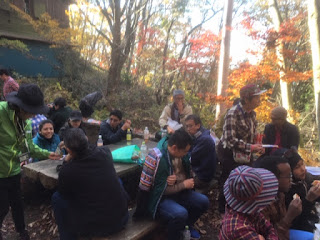 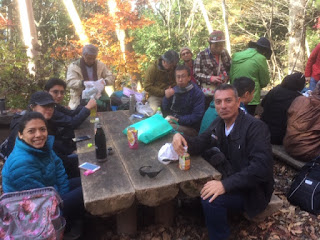 We climbed down via Trail No.４, crossing the famous suspension bridge, which is one of the most popular spots in the mountain in all seasons.


Mt.Takao is an attractive mountain all through the year, showing its different beauty in each season. Yet I dare say that visiting here on a fine warm day during mid-November to early-December like today is the best and I hope all the guests enjoyed the tour.

We welcomed Singaporean guest who have visited japan 10 times already.