Today we had two guests from USA (Houston). They are working colleague in the same BBQ restaurant there, so we had a lot of talk about Japanese food. They liked Sushi, but they were not good to use chopsticks.


We got on the cable car that is the steepest in Japan, so they said it’s like a roller coaster in amusement park. We pretended to release hands hold, Yippee ! When we reached to Takao BBQ garden. They were so excited because they work in a BBQ restaurant, as mentioned above. On the observation deck there, we had really nice view. 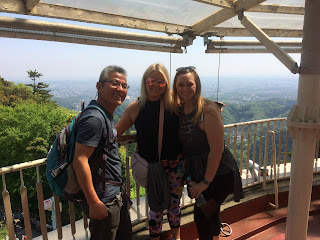 At Yakuo-in temple, we saw mountain priests and their fire ritual. They cast a question, whether or not a priest can get married. We explained now Buddhism society is modernized, so they can get married. They live in the temple outside Mt. Takao and commute to here. Sometimes they drive a car.


At the top of mountain, we could see Mt. Fuji, and it’s so nice weather and so warm. We are so lucky. 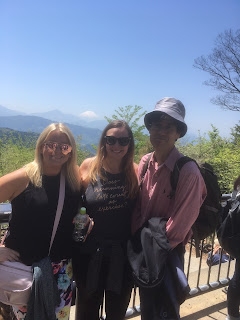 We got down by the chair lift、enjoying the grand view. They seemed to have enjoyed the tour very much and we, too, enjoyed the tour with them.
(by Guchi)
投稿者 TENGU Takao-san English Volunteer Guide Club 時刻: 9:23 0 件のコメント: 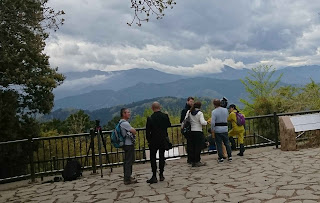 Today’s tour was a very unique one because I did not have to explain about things nor to speak English.
The guests were from a TV production company in Holland who came to Mt. Takao to make a documentary with the theme of “Japanese love of nature”.
They had contacted us wanting to hike the mountain with our elderly member(s) to interview them on the way.
The guests of 6 consisted of a lady Director, a male interviewer, a cameraman, all from Holland, a Dutch and an American gentlemen, who are residents in Japan and helped the Dutch crew to make various arrangements here and a Japanese lady who was a friend of the crew and to be interviewed as one of hikers.
I felt relaxed when we were told to speak Japanese and no English. Actually I found that the interviewer (once lived in Saitama, Japan) and the two Japanese residents speak fluent Japanese.
We met them at the Takaosanguchi station around 9:30 and after discussing the day’s plan, we decided to take the cable car up, then going to the top via Trail no.1 and going down via Trail no.4 and no.1, coming back at the Kiyotaki Station at the foot of the mountain by the chair lift.
Before we set out, they fixed me (and the Japanese lady) with a microphone and a recorder
I was a bit nervous about the interview because I had been told that they were interested in the cultural/social background of our love of nature and I didn’t know how to answer but once interview started, I did not feel that I was being interviewed and instead, found myself enjoying the conversation with a new friend.
I had totally forgotten about the microphone and the recorder and hope I didn’t mention anything inappropriate.
The interviewer was a handsome young man as tall as 186cm. Dutch people are known to be tall and according to him, the average height of Dutch male is 183cm and that of female is 174-5 cm. I asked him what kind of food makes Dutch people so tall, then he said maybe kale was the answer. I should have known that much earlier!
Though we were worried about the weather, the tour went well as scheduled without rain.
After lunch at the noodle restaurant at the top, we started going down to the chairlift station
I must mention that Mark, the Cameraman did his hard job very well, running ahead of us all the time, carrying heavy equipment. Thank you and well done, Mark!
According to them, they will edit the shooting this time to 15minutes program and hopefully sell it to Dutch National TV.
So broadcasting the program on National TV has not yet been guaranteed, but seeing and joining their effort here today, I really hope they will be successful.
Thank you, all of you. It was a great and enjoyable experience for me and thank you for the delicious waffle you gave me as a souvenir from Holland.

A guest for April regular tour was a young couple from Malaysia. They were using 15 days holidays for going around Tokyo and found Mt, Takao on the top of the list for Hachioji tourism. Unfortunately it had been raining since the previous night and still raining in that morning. It was a big disappointment for me kept checking the weather forecast for a week. However the rain was getting weak gradually and almost stopped by the time I arrived at Mt, Takao. Is it a miracle? No, I knew because we had a “hare onna” (a women brings the sun wherever she goes) in our member and her power was strong enough to send away rain! 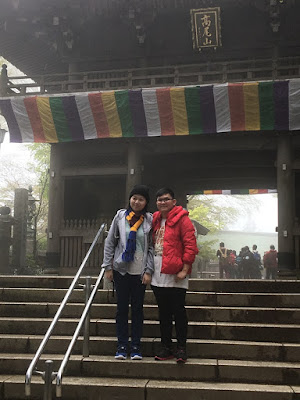 When we started to walk toward the Yakuoin Temple, the pass was getting covered with a white mist. How mysterious! It looked like proving the words “this mountain is filled with spirit” 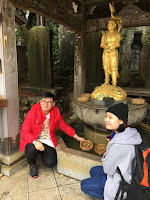 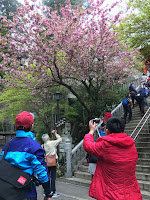 The guest’s main plan was to see senbonzakura in Icchodaira but it was already over so we decided to go down from the top after lunch. There remained some yaezakura (double-flowered cherry tree) or sidarezakura (weeping cherry tree) on the way and they enjoyed taking photos of them.
In addition to our tour, an exciting event for us was going on. Dutch national TV asked TENGU to help make their program. One of the members of our club offered the help and we hiked together. Our hare woman was also interviewed and filmed. It seemed to be well done.
Before the tour, I had a lot of worry about weather or so on. But it turned to be a nice day thanks to the guest whose smile was impressing and my colleague. I asked the guest if they cared about rain on the special day. They said “Not so much. Because we have some rain almost every day in Malaysia” I learned I should take it easy and things go well. 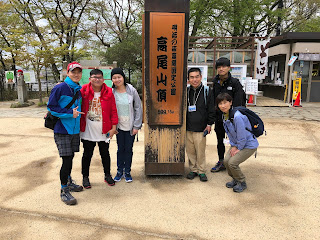 This tour supposed to visit one lady from Canada. Besides, the local TV station, MX TV channel 9 asked to accompany with us to make the report of the foreign visitors’  walking under Sakura Cherry Blossoms at Mt. Takao . All of us joined at the exit of Keio Takaosan Guchi Station at around 9:30 a.m The TV crew members were 4 persons in total and brought 2 TV cameras, one long fishing rod microphone and the heavy tripod (8KG). They mentioned to carry them all the way to the top. Before starting we talked the intention of this tour each other including the guest and started to walk and take video all the way  We got on the cable car to the mid of the mountain. . 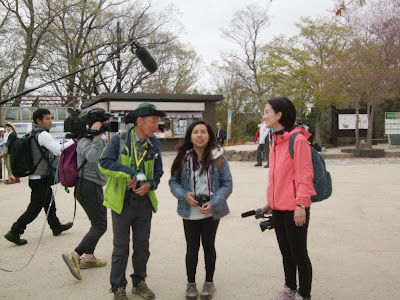 We stopped at a few traditional spots such as Tako-Sugi and Yakuouin Temple . At noon time we reached to the top of the mountain. Mt. Fuji did not appeared because of the clouds today The guest was very active and wished to go to see further Cherry Blossoms in other place, Ittyoh-Daira area where the blossoms were in full bloom and we had the lunch there at 12:30. During the lunch time TV crew asked to the guest some questions about the impression there. 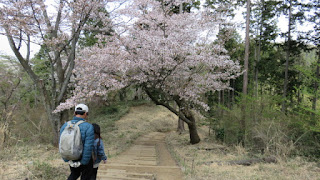 TV cameras crew had taken video all the way running forward or behind us with their heavy staff of the TV cameras. 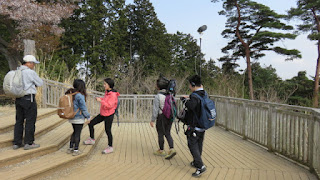 We took photos everybody including camera crew there and we said Good Bye there.


Then we started to walk down on foot until the Takaosanguchi  station  through  trail No.4 and 1. We reached there at 16:15 PM. It was good walking for all of us. 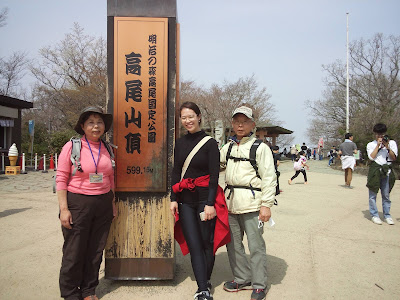 It was a fine day and warm like an early of May.


We met with a young business woman came from Singapore.at the exit of Keio Takaosan Guchi Station at around 9:30 a.m.
After we exchanged greetings each other and made confirmations necessary to climb Mt .Takao, we stated the tour.
My colleague began her guide with FUDO-IN temple including a few spots around there. Cherry blossoms were in full broom at the foot of Mt. Takao. The guest from Singapore took many photos.
We took the cable car to ascend and we enjoyed mitsuba ( tri foil )- azalea in full bloom through the window.
After we got off the cable car, we took her at the observatory area.
Unfortunately, we could not see the Tokyo-sky Tree Tower because it was hazy in the air. 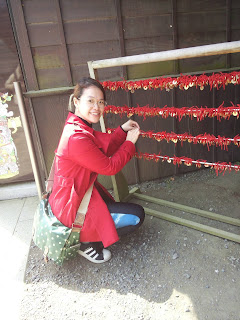 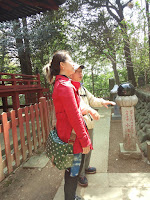 We met several groups of high schools’ students as well as elementary schools’ students.
and many foreigners together with their families. I thought they enjoyed spring holidays, though it was not a national holiday.
We continued our guides regarding regular points from Octopus-cedar tree to the Sengen-jinjya Shrine. It was one of spots which the guest was impressed because she climbed Mt. Fuji in the past. I was embarrassed to answer her question that how many branch temples are there in Japan. I asked her please leave an answer for my homework.
We arrived at the summit at around 12:30. Fortunately, we could take an vacant space under Azumaya(an arbor) for our lunch. After that, we enjoyed BINGO game. 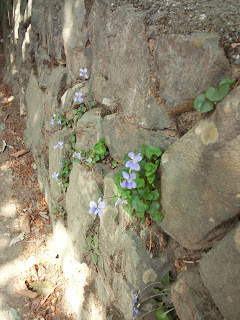 The trail 4 was taken to descend.  During the walk, we found many violets on the slope.
The guest seemed to be scare to walk the MIYAMA bridge (suspension bridge).
So, I told her a few advices. Namely, “ it is about 40 meters long, it is not so deep,
however, do not look down while you are walking”.
When she arrived at the suspension bridge , she began to walk and could walk through the end. I said’ You made it’. Then, she seemed to be relieved.
We took the chair lift to descend and arrived at KIYOTAKI station at around 2:00 p.m.
END
WRITTEN BY NABE](M.Watanabe)