We are now in the rainy season.  It was hot and humid today!

In fact, it started to rain when our guests, who are a group of the JICA trainees from overseas (and one Japanese lady who is a friend of one of them), and TENGU members met in front of Takaosanguchi Station this morning, which was far from a great start of the tour.

Having said that, when we finished the meeting for introducing ourselves to each other and going over a little bit of housekeeping, the rain eased up.


Fifteen of our guests from overseas are from Indonesia, Egypt, Iraq, Zambia, Bhutan, Georgia, Mozambique, Afghanistan, Mauritius, Philippines, Uzbekistan and Tadzhikistan.  There was one no-show while there was one new guest.  We divided our guests into two groups.  Each group was guided by five TENGU members, respectively.


According to our guest from Zambia, this tour was his very first mountain climbing experience.  He said that Zambia is so flat.


On the way, we took a cable car leaving at 10:15 from Kiyotaki Station and then followed Trail No. 1 which is the front approach to Yakuo-in Temple, the main religious structure in Mount Takao.


As more or less expected, we were not able to see either Tokyo Skytree or high rise buildings in the central Tokyo from Kashmi-mae Observation Deck.


Thanks to the bad weather, however, Mount Takao was much less crowed than usual and we could spend more time in guiding our guests.  So, our group arrived at the peak of the mountain around 12:45 much later than usual to find the other group had already finished their lunch.  By the lunch time, it had stopped raining. 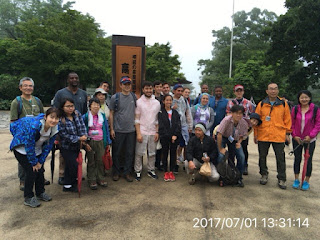 Although it was still too difficult to see Mount Fuji from the peak of the mountain then, we could occupy roofed benches for having lunch, which should have never been available in better weather conditions.


After having lunch, we took pictures with our guests at the peak of the mountain and then started going down around 13:40.  We chose a different (but easier) route on the way back.


Fortunately, the fog cleared up by that time and we could see Tokyo Skytree, high buildings in Shinjuku, etc.  Our guests were very much excited to see them. 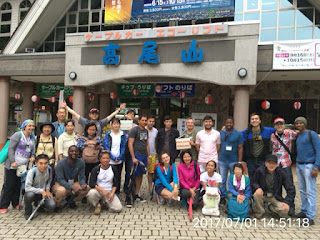 We came back to the foot of the mountain around 14:30 and took photos with our guests again in front of the cable car station.  Then, we said “good-bye” to them, which was the end of the tour.