Though in the early morning it rained a lot around Mt.Takao, it was cloudy by the sunrise. Four guests booked this tour, but two of them cancelled, finally two ladies from Australia were guided by three TENGU members. Since one of guests would like to see a waterfall, we planned the walking route from Biwa-taki to Yakuo-in temple then the summit. However due to the rainfall, we changed the route that Biwa-taki came to the final spot.

We met at Takaosanguchi station at 9:30 and introduced each other. Then we talked about the sweeper boy and flying squirrel at the foot of mountain and took the cable car to the middle.

When we arrived at Takaosan station the atmosphere was a bit hazy. This mysterious landscape was also tasteful, though we couldn’t see skyscrapers nor Sky tree. 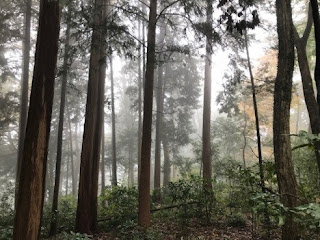 We guided through the trail #1 to Yakuo-in temple, talking about Octopus cedar tree, rich nature of mountain, 108 human desperation in Buddhism, Izuna-Daigonngen.
At the main hall of Yakuo-in, one of our guests told that 11.11(November eleventh) was the good fortune day to make wishes in Australia. And amazingly we were there at11:11am. It was 11.11.11:11. 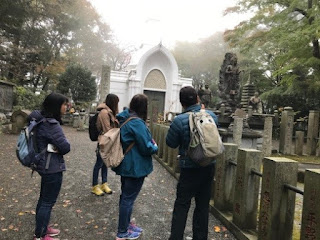 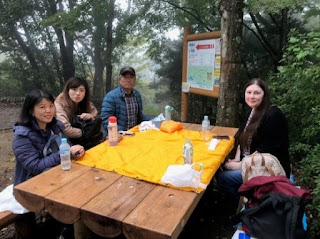 Then we went up to the top of the mountain, took a photo together and had lunch. An alley cat welcomed us. The haze was cleared already, but unfortunately Mt.Fuji was covered by thick clouds.
We took trail #4 and Biwadaki trail to return, walked through the quiet forest.
At Biwa-daki fall we heard a powerful voice of the man who was doing self-discipline under the water fall.
The tour went through in the friendly and relaxed atmosphere.
Finally we came back to Takaosanguchi station and ended the tour around 3:30pm.

Guided by Nosan, Misa and written by Tack.