A gentle hike in severe heat wave on July 24th

On the previous day at Kumagaya city, 60km north-west from central Tokyo, recorded 41.1 degrees Celsius, the highest ever in Japan. A deadly heat wave blistering across Japan has claimed more than 30 lives this month, with a little relief in sight as record temperatures are expected to persist until this week. The media reported that eleven people, mostly senior citizens, died of suspected heatstroke on Saturday July 21st alone. 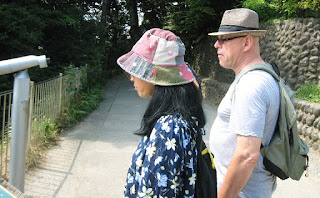 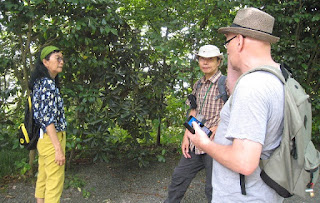 Among these high-temperature and humidity, we guided a nice couple from Belgium. I and my colleague guide are also senior citizens though young in spirit. So, we were conscious to take the water and a rest at a good time. My colleague guide prepared a towel in which a refrigerant was put and bound a neck then cooled it. 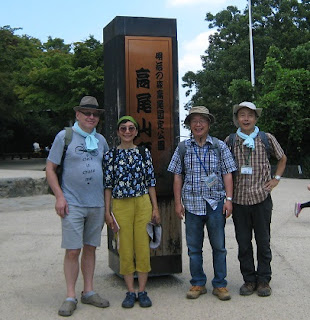 We met at the exit of Takaosan-guchi station at 9:30AM. After introducing ourselves, we took cable car to half-way up, then took trail-1. Along this way, there are Octopus Cedar Tree, the first gate to the sacred area called Joshinmon gate, Jinben-do small shrine, and the stone monument of no killings. We took men’s slope that has 108steps of which number showing human’s worldly desires. At the Yuki-en, we explained the white structure of a stupa, where the ashes of Buddha were enshrined, which were given in 1931 by the king of Thailand. The woman of the couple was born and raised in Thailand. To this friend-ship, we thanked each other and wished to keep it. 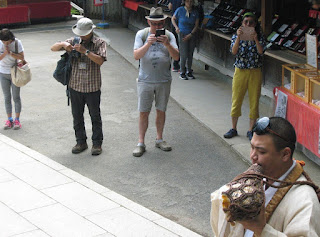 We took lunch at summit. As we had thought we could not see Mt Fuji from there. Taking Fujimichi-trail then Cable car for going down. Coming back to the foot, near the station we dropped in the café bar then enjoyed drinking beer, coffee and tea. They were to go for one -week Kyoto trip from next morning. Now they are living in a small town in Belgium near the French border. So, during the stay in Kyoto, hoping to visit the small and calm town. We thanked and hoped them to enjoy the visit of Tokyo, Kyoto.   (Comson)
投稿者 TENGU Takao-san English Volunteer Guide Club 時刻: 19:44